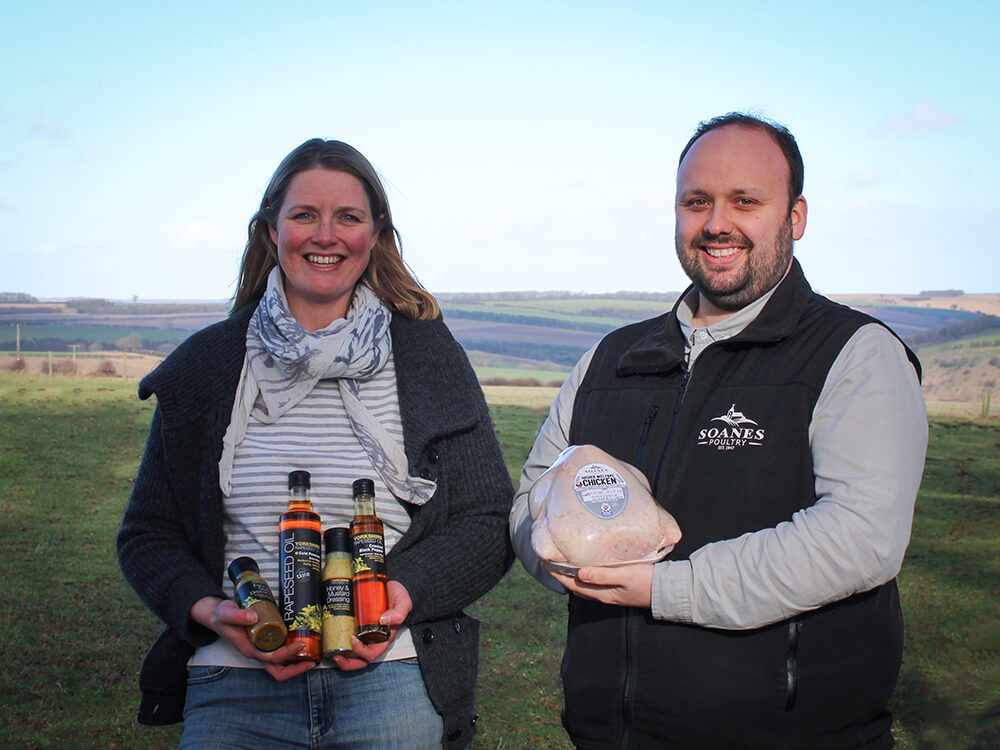 Blue skies were over Thixendale when Ben made the short journey over the Yorkshire Wolds to come and visit us on the farm. Sitting in the kitchen we had a celebratory cuppa as the news had just been released that Ben has been promoted to the position of Managing Director of Soanes Poultry in anticipation of current MD’s, Nigel Upson retirement early next year! Amazing news for someone who had originally signed up post A-levels back in 2008 to work with them in a temporary Christmas position and planned to stay just six weeks!

Our opening chat about provenance is certainly something that both our family businesses certainly have in common. Understanding the origins of where our food has been grown or raised is ever high on our agendas, as well as the general public’s ever-growing appreciation. We also talked about the public’s need to source products that tick the environmental and sustainability boxes for them, and with Soanes this is something they have always looked to, but again with ever increasing importance to them.

Ben shared with us that the wheat grown in rotation on the 3,000 acre family farm is used for feed for the chickens, with the leftover chopped wheat straw used to power their biomass boiler. Like us, the farm benefits from the high quality, chalky Wolds soil. We get unique tasting rapeseed oil, and from their wheat they get a superior tasting chicken! Add to that the lack of stress that the chickens experience with the farm to fork journey being less than 24 hours, we now know why Soanes chicken tastes as good as it does.

It's that taste and quality, along with their provenance, sustainability and high welfare ethics that attracts customers far and wide. Their Great Taste award-winning chicken is also supplied to a number of top end restaurants, including Michelin-starred eateries in Yorkshire and beyond. It’s the whole team’s aim that, when you choose chicken, you choose the best you can for you and your family. It may mean choosing less, but the quality is paramount. ‘Eat Better Meat’ is the trademarked mantra of leading online sustainable butcher, Farmison & Co and certainly one that Soanes subscribes to.

Soanes have been greatly rewarded over the years for what they produce. Back in September we both at-tended the Garbutt + Elliott Food & Drink Awards and we were there to see them walk away with the Producer of the Year award, and they were also the overall winners at the event! A proud moment for them to see Nigel accept those awards after a challenging time for everyone. The judges were looking for local producers dedicated to using the best of ingredients to make exceptional food that delights customers, and Ben was absolutely delighted that the award was based on their stand-alone product chicken, just chicken, nothing added. High testament indeed.

The awards evening was one of the very first times we had attended a live event with our peers since lock-down and we were thrilled (but nervous!) to be there supporting and celebrating others. Lockdown had been a challenging time for all, and we wanted to know how Soanes had approached it, as we’d seen in the press the community efforts they were making.

In the first lockdown, Ben had been contacted by a local greengrocer, the award-winning Rafters in Driffield, looking for help and Soanes provided them with one of their vans and a driver to get out to the local community. It soon became apparent that people out there had a real need to get food on the table, so they decided to provide 250 chickens for hard-working staff at a number of Driffield care homes to enjoy at home.

With social responsibility high on their agenda, it kickstarted their work with EMS in Hull, a multi award-winning charity working with their local community to alleviate food and fuel poverty. Soanes have continued their pledge to date to provide chicken for the charity and it’s shared in different ways, whether that’s meals being made and offered out in the Community fridges across the city or being part of their Cooking on a Budget sessions to encourage people to cook meals from fresh ingredients. Some of those sessions take place at a school in Hull that looks after those affected by learning difficulties and disabilities. It’s amazing to see those children cook a meal for their families for the first time ever. We too understand that the ability to equip both children and adults with the skills to provide an affordable, well-balanced, home cooked meal is immeasurable.

On a personal note, we wanted to find out from Ben where he would choose to eat out. We were thinking he may be drawn towards those high-end restaurants where they supply the kitchens, but his ideal meal is a home-cooked one! Cooking and sharing good food around the table with good friends is what it’s about for Ben. Keen to find out his signature dish, he shared that he loves exploring fusion food, perhaps Korean or Pan-Asian inspired, or at the other end of the scale, keeping it very simple and barbecuing chicken kebabs over coals. His outdoor kitchen with all the kit is very much utilised and gives a great deal of pleasure to the whole family! We did find out that Ben did originally start off his food journey at catering college but found the heat in the commercial kitchens overwhelming! If you can’t stand the heat, get out the kitchen!

There’s a lot of influences in how Ben reached where he is today. Food and where it comes from has always been at the forefront. His father, Graham is a gamekeeper and Ben saw the journey of his food to the table – with simple, well cooked, traditional dishes. Ben’s wife is Lithuanian – and they visit her family there and still today see those traditional foraging and preserving skills being used every day, to be passed on from generation to generation. With Ben’s help, his daughter will certainly have a good understanding of provenance. Soanes Poultry will certainly be in good hands with Ben at the helm. 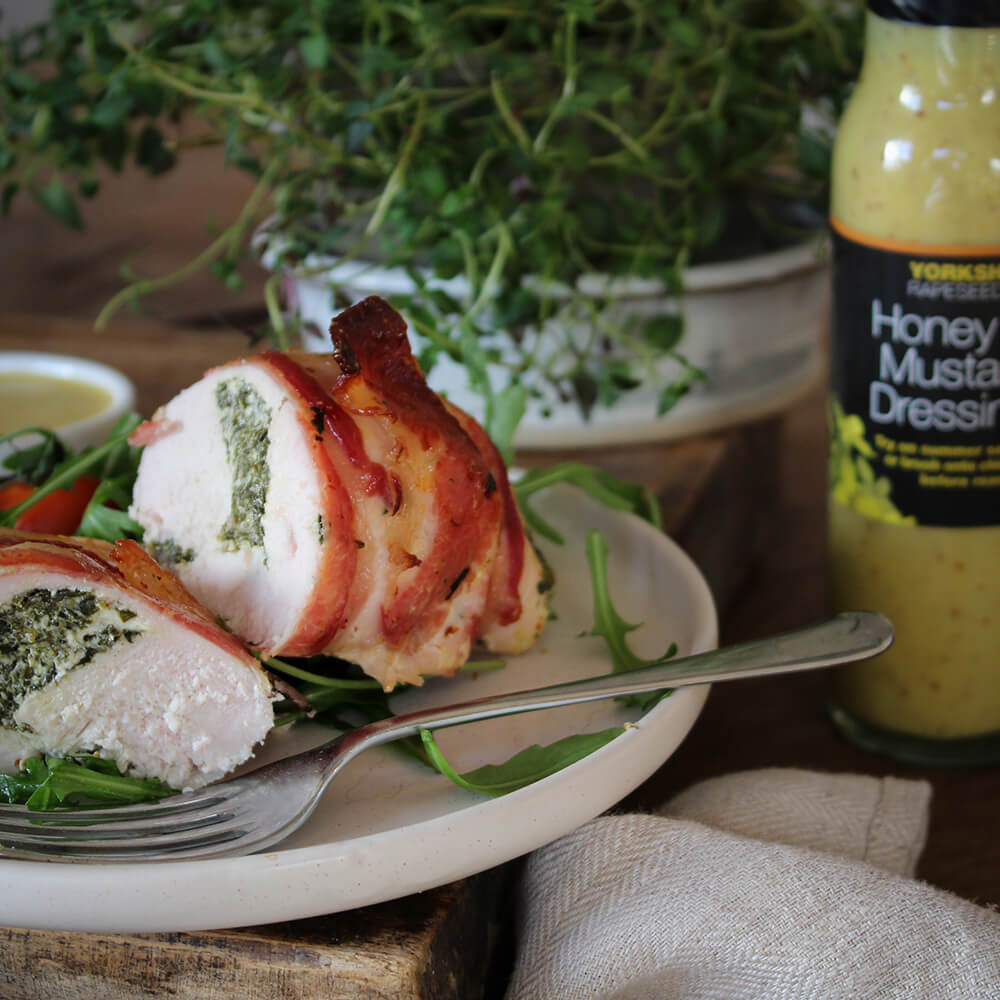 As part of our Yorkshire Stories Series, we have teamed up with Soanes Poultry to create 4 delicious new recipes, tasty for all the family! Check out our Honey & Mustard Stuffed Chicken with Spinach & Goat's Cheese here.