Out of stock
SKU
PRAWN
£0.00
INGREDIENTS

The sharp, crisp flavour and texture of the Basil & Tomato Salsa contrasts perfectly with these Stuffed Pancakes. Our Basil Oil has a lovely light flavour that doesn't over power the full on flavour ingredients in this recipe. We like it in the summer as a dish for entertaining.

Skip to the end of the images gallery 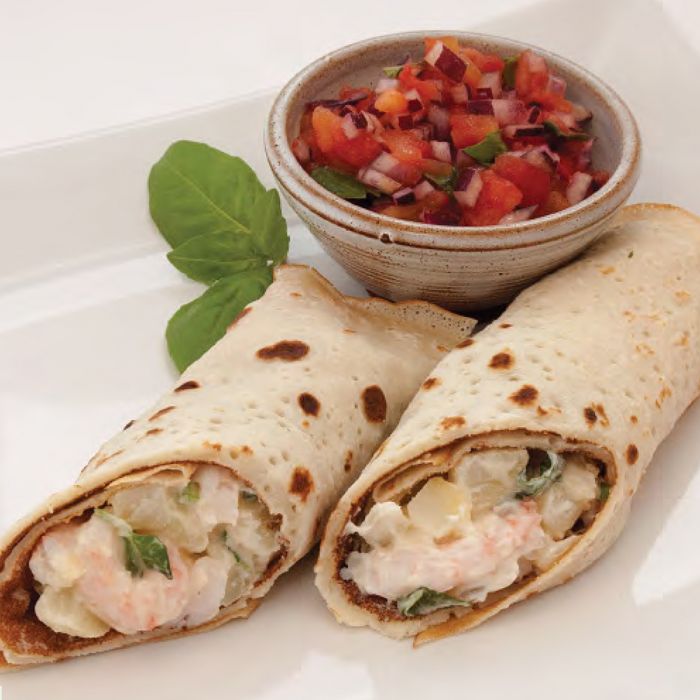 Skip to the beginning of the images gallery
Details
METHOD

To make the pancakes

Put the flour, egg and milk into a large jug and mix thoroughly with a hand held blitzer into a smooth, creamy batter. Leave to stand for 30 minutes.

Place a 20cm non stick crepe pan or frying pan (very lightly greased with Yorkshire Rapeseed Oil if necessary) on a high heat on a hob. When hot, pour in about a sixth of the batter, tilting the pan quickly to spread the mixture out and evenly cover the base. Cook over a high heat until set and the underside is lightly browned, this will only take a few moments. Then carefully turn the pancake (or toss if you're clever!) in the pan and cook the other side. Remove from the pan and place on a plate. Cook 5 more pancakes in the same way.

To make the filling

Cook the potatoes on the hob in boiling water until tender - about 20 minutes. Drain and leave to cook, then remove and discard the skins. Crush the potatoes roughly with a fork and put to one side.

Fry the onion in 1 tbsp of Yorkshire Rapeseed Oil with Basil over a high heat for about 3 minutes until golden and just beginning to crisp. Remove from the frying pan and place in a large mixing bowl.

Add the remaining 1 tbsp of Basil Oil to the frying pan and, when hot, add the crushed potatoes. Cook over a high heat, turning frequently for 5 minutes until the potatoes are just beginning to brown. Remove from the pan and add to the onion in the mixing bowl.

Mix together the yoghurt, lime juice, and Honey & Mustard Dressing and add to the potato and onion mixture. Mix well. Stir in the prawns carefully and finally add the torn basil leaves. Mix thoroughly but gently.

Roughly divide the mixture into 6 portions. Place a portion of the filling across the middle of one pancake and then roll it up into a sausage shape. Make 5 more stuffed pancakes in the same way. Place them all in an ovenproof dish, cover with foil and place in the middle of the oven for 30-40 minutes to heat through.

To make the Salsa

Remove the skins and seeds from the tomatoes by placing the tomatoes in a heat proof bowl and cover with boiling water and leave for a couple of minutes until the skins have split. Carefully drain away the hot water and when cool enough to handle, peel off the skins. Cut the tomatoes into quarters and remove and discard the seeds.

Chop the flesh and place into a mixing bowl. Add the onion and stir in the Yorkshire Rapeseed Oil with Basil and the lime juice. Mix thoroughly then stir in the torn basil leaves. Season with a little salt and freshly ground black pepper.

Remove the stuffed pancakes from the oven and serve with the Salsa.

Fresh Basil always seems to release its flavour better if the leaves are torn into small pieces with the fingers, rather than chopped with a blade.

Recipes for this product