Out of stock
SKU
HOTXBUN
£0.00
INGREDIENTS

There's nothing better treat than a warm Hot Cross Bun with a cuppa! These buns are fluffy and light and full of rich fruit. We make ours with a recipe from Paul Hollywood, and simply swap out the butter for the same weight of our Yorkshire Rapeseed Oil. It's that simple to make the switch and bake with Yorkshire Rapeseed Oil.

50ml Yorkshire Rapeseed Oil, plus a little extra for oiling the bowl

Skip to the end of the images gallery 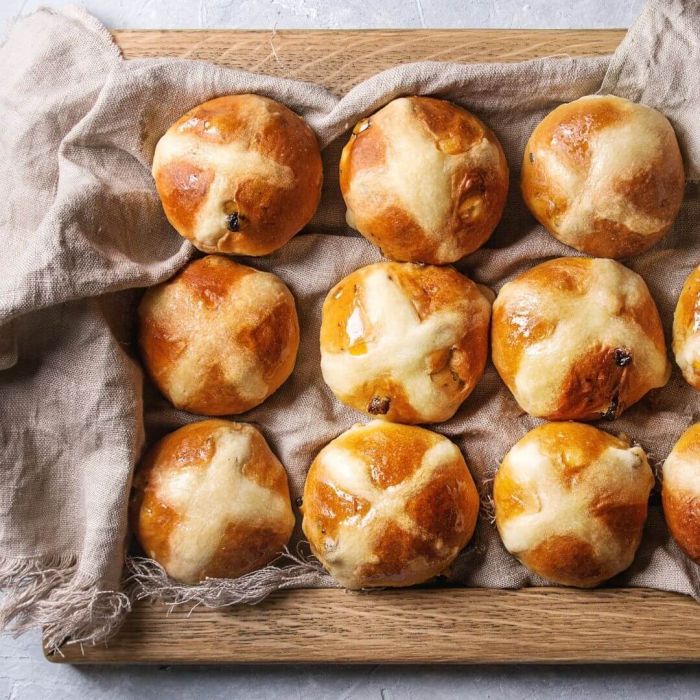 Skip to the beginning of the images gallery
Details
METHOD

Bring the milk to the boil and then remove from the heat and leave to cool until it reaches hand temperature.

In a large bowl, mix the flour, sugar, salt, yeast, butter and egg together in a bowl, then slowly add the warmed milk until it forms a soft, sticky dough.

Add the sultanas, mixed peel, chopped apple, orange zest and cinnamon, then tip out of the bowl onto a lightly floured surface. Knead the dough by holding the dough with one hand and stretching it with the heal of the other hand, then folding it back on itself. Repeat for five minutes, or until smooth and elastic.

Put the dough in a lightly oiled bowl, cover with oiled cling film and leave to rise for approximately one hour, or until doubled in size.

Divide the dough into 12 even pieces, and roll each piece into a smooth ball on a lightly floured surface. Arrange the buns on a baking tray lined with parchment, leaving enough space so that the buns just touch when they rise and expand. Set aside to prove for another hour.

For the cross, mix the flour with about five tablespoons of water in small bowl, adding the water one tablespoon at a time, so that you add just enough for a thick paste. Spoon into a piping bag with a small nozzle. Pipe a line along each row of buns, then repeat in the other direction to create crosses.

Bake for 20-25 minutes on the middle shelf of the oven, or until golden-brown.

Gently heat the apricot jam to melt, then sieve to get rid of any chunks. While the jam is still warm, brush over the top of the warm buns and leave to cool.